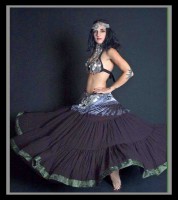 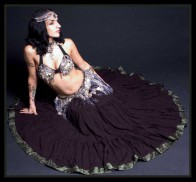 I designed this skirt for a FatChanceBellyDance® stage production featuring mega spins back in 1998! I named it the Spinning Skirt and am honored to see it become a Tribal staple! But beware! many banded skirts advertised as spinning or twirling skirts are knockoffs made of cheap limp rayon or polyestor!  My skirts are made of high quality, springy, rayon challis, so responsive they almost fly by themselves! The skirt is black, with enough fullness at the top and ten yards at the hem for maximum flight, or 15-20 yards for more flounce! Both accented and weighted with an eye catching band of colorful brocade.

For more skirts information, including tips on care, sizing, and finishing; go to Skirt info.

Text and images © 2020 flyingskirts.com. Reproduction without prior approval is forbidden.